As an institution founded on the principle of "non-preconception", the Flaherty Seminar often plays host to a tussle between that notion and the more pragmatic need of giving the year's offerings a name. As problems go, it's a small one, but what often occurs is that participants fall into the annoying habit of using the year's thematic tag as a yardstick against which the work is measured, in lieu of considering the films on their own merit.  Open Wounds, this year's selection, was as good (i.e. open-ended) a name as any in recent memory, and yet what emerged was far more complex than anything those two words could contain.  Masterfully assembled by Pamplona's Punta de Vista artistic director Josetxo Cerdan, this year's chosen work offered a wealth of new discoveries (along with a few familiar faces bringing new or little-seen works), transcending whatever else the ostensible title might suggest.

One unstated but unmistakable thread emerged early on, for which the limited cellphone reception on host Colgate University's rural campus seemed a portent: a general disorientation was felt again and again, as though our collective GPS had been disabled. How many of us will allow ourselves to be lost, to be left to our own devices?  How lost are we willing to be, and for how long?  These and other questions would hover over the course of the week's proceedings. Rebecca Solnit offers a useful etymological insight when she writes, "The word "lost" comes from the Old Norse los, meaning the disbanding of an army, and this origin suggests soldiers falling out of formation to go home, a truce with the wide world."  Ben Rivers's The Coming Race, the opening film for this year, summons such an image, with its slow legion of men traipsing up a mountain. The filmmaker's primary gesture here is to play on the ambiguity of the question: just who has issued these marching orders?

In another Rivers film, Ah, Liberty!,  kids run amok on a property strewn with disused machinery,  while the very distinctions between interior and exterior are skewed by porous, doorless, windowless architecture and a car that's driven through water.  Again, Solnit: "Children seldom roam, even in the safest places.  Because of their parents' fear of the monstrous things that might happen (and do happen, but rarely), the wonderful things that happen as a matter of course are stripped away from them.  For me, childhood roaming was what developed self-reliance, a sense of direction and adventure, imagination, a will to explore, to be able to get a little lost and then figure out the way back."  Ah, Liberty! seems to ponder the question of--to put it crudely--what separates freedom from neglect; with this, I was reminded of Hirokazu Kore-eda's Nobody Knows. Both of Rivers's films, with their enigmatic onscreen behavior and absence of exposition, guarantee a certain disorientation and at the same time risk that their audience may never return. Much to his credit, Rivers has a strong intuitive sense, alert to that undefinable threshold of going too far. 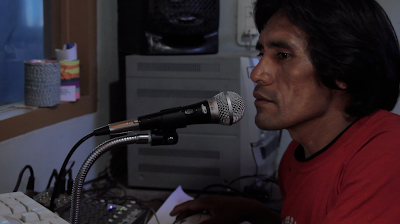 A more intricate scrambling of our narrative compass-points occurs in Sebastian Lingiardi's Sip'Ohi- El Lugar del Mandure, a shaggy-dog story in the spirit of Diderot.  This film, about the act of storytelling and gathering of indigenous folktales amidst the Wichi and Toba people in northern Argentina, protracts narrative closure in favor of interruption, anti-climax, and nested structure.  Its shifting relay of narrators catalyze ongoing tensions between the voice as heard within the unique form of writing that is cinema, and the desire within the film to preserve an oral tradition--fluid by its very nature--from disappearing altogether.

Within this self-invented "land of the lost", it's only natural that there be some attempt at navigation; in his Paralelo 10, Andres Duque offered a haunting portrait of a woman who enacts a private solar mapping every day on a street corner in Barcelona. While the slow choreography of her gestures are all that is visible from the cars speeding by her, Duque's camera reveals their significance; like a De Chirico painting come to life, she carefully aligns the shadows cast by the set of translucent drafting triangles in her hands with cryptic markings on the median pavement. 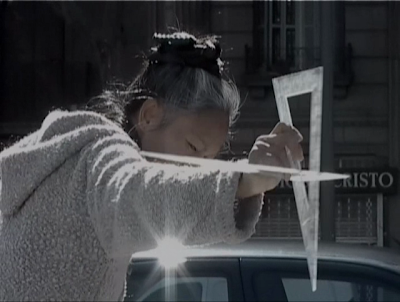 Still from Paralelo 10 by Andres Duque

Participants who return to the Flaherty take part in a related endeavor, coming face to face with the paradox of "inviting surprise"; though much the same might be said of those drawn to avant-garde art in general, what sets the Seminar apart is the blind trust it requires. There is something ritualistic to this, a kind of fort-da game that is left to the individual to fill.
Posted by Jim Supanick at 5:50 PM