This is Not a Portrait 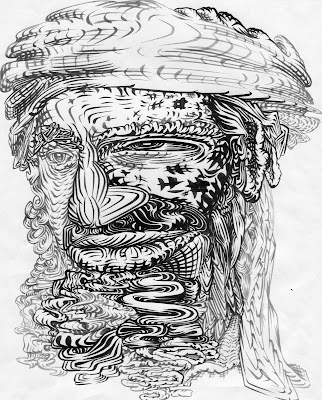 Some months back I was asked by my friend James Esber to participate in a project to be included in his solo show that opened last week at Pierogi Gallery; my assignment was to make a drawing based on one of his, part of a series of portraits he’d done derived from an iconic photograph of Osama bin Laden. Now completed, my drawing--along with 99 others--hang together as part of a work entitled This is not a portrait.

James and I have known one another for a good thirty years, having met at art school in our hometown of Cleveland. The rigorous, sometimes stodgy program there was--until recently--the only five-year BFA program in the country, with its industrial design program attracting recruiters each year from the Big Three automakers; we “real artists” were on our own.

Though I hadn’t drawn seriously for some time, reasons abounded to put hesitation aside and do it: for one, it offered another glimpse into his creative process, continuing on from the interview I’d conducted two years ago with James and his long-time partner (and fellow painter) Jane Fine for The Brooklyn Rail just prior to their first collaborative show.

The project too bridged my artistic origins (I started out as a painter) to current interests in collaborative and constraint-based processes; the distance between certain suppositions contained in each, though, was what really intrigued me the most.

For the last several years, James has derived inspiration from images ranging (in his words) “from the violent to the saccharine”; he salvages scraps from photojournalism, caricature, kitsch figurines, the Bureau of Printing and Engraving, the marginalia of Don Martin (of MAD Magazine fame), and other picture-making traditions light years away from museum decorum. The ability of these images to survive his radical transformations is testament both to his draftsmanly skills and the deep imprint of their source materials upon our psyches.

Layered too within the work is a long-standing fascination with anamorphosis and other types of distortion. There’s a spatial elasticity that varies from one work to the next, but that never fails to astonish. The bin Laden drawing from which I worked is typical: as much as likeness is retained, the movement of its lines is cutting, playful, and free. A face we know so well from page and screen is nonetheless prone to deformation. The left side of the face and the right eye appear pulled by opposing gravities, while hair, beard and headscarf cascade joyously toward the bottom of the page.

During breaks in the course of drawing I paused to make some notes; they’re the basis for the following, grammatically repaired and made a bit more cohesive after the fact.

- First things: wipe down table, and wash hands to protect the masterwork-in-waiting from bodily oils and the embarrassing smudges they make. Inside the supply pack he’s given me are bottles of brown and black ink, a little welled palette, and a much better sable brush than the ratty ones I’ve used in the past. A software upgrade or a case of blank tapes can never compare to such implements (or, more than anything, paint), whose sensuality I now realize I miss. 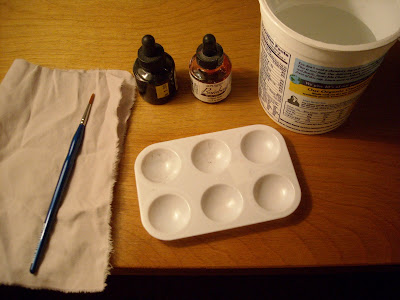 - The enclosed guidelines state that:

The drawings will be made on a translucent piece of parchment with a copy of the original drawing underneath to serve as a guide. However, I am not asking people to make an exact copy of my drawing. It is more accurate to say I am asking them to overlay each line of my drawing with their own line.

And the last paragraph:

An 8 1/2” x 11” reproduction of my original drawing is included as a second guide. You may or may not wish to refer to it. I am estimating the drawing will take between two and five hours to make. I want it to be an enjoyable process, so if it appears to be taking longer than this, you are probably being too precise or too cautious.

- All set up, ready to go- now to match the grace and agility of his line and add my own.

- First hour is spent just trying to get my bearings; while relieved of the challenge of gauging proportions by the guide drawing underneath, it turns out the parchment is more opaque than I’d expected. I struggle to see more than the basic location of marks- their subtle articulation is pretty much obscured. Moving across the surface, looking for a foothold to dig into- a few strokes here, a bit over there; hopefully it’ll add up to something.

- Never really got the hang of brush and ink either- the first-try accuracy was never my forte. No corrections! I refuse the loophole allowed in the instructions:

A small container of white gesso is provided in case you make a mistake so glaring that you need to correct it. Simply use the gesso like White-out to overpaint the area and then redraw the lines on top after it dries.

Now I’m wavering... maybe I’ll allow myself a second go-round with the gesso just to clarify a few passages. But then where does it end? What’s to stop me from correcting the corrections? This is where neurosis kicks in.

- Speed seems vital to mastering this, at odds with the plodding line I’m laying down.

- Getting into a rhythm now. Or maybe its just the spaces between my many attempts at a beginning are now filling in? Silencing the critical voice seems to help things flow.

- de Kooning envy reappears (how long since I felt that?), of that extraordinary facility (innate?) honed beyond the human by his years painting signs. Drawing with his eyes closed, along with those made while watching TV (and with whiskey as a constant companion) were some of the methods used to stymie that facility and keep himself interested.

- Ballpoint pen is the tool for me, more forgiving the way it allows the hand to keep moving and absorb the angst that comes with the desire to make the right strike in the right place.

- Some marks describe; others delineate or direct; often a single line performs more than one function. Above and below the right eye are a series of hashtag-ish flourishes- more than any others, they shirk their depictive role and assert a mark-for-marks-sake autonomy. The right side of the beard features a serpentine swoop that’d make a nice water park attraction. Watch out though- you’re liable to land in what looks like a gnarly heap of intestines.

- Esber envy joins that of de Kooning. James’s grace is astounding- he’s incapable of making an ugly mark. Surprised too by the competitive impulses aroused going into this. Imagine, me trying to improve on this work. Thinking back to school, I recall a competitive spirit, if you could call it that- more like a challenge by example.

- Funny to realize that the act of drawing may bring me the closest I ever get to a meditative state. To draw is to paddle against the current of shortening attention span, a slow triangulation between eye, object, and image.

- At it for a few hours now- time to take a break.

- The short break I meant to take turned in to two days- now on to round two. Surprised at how much there is still to do.

- Is a drawing of a drawing still a drawing? It seems closer to what tattoo artists do. I waver between my attempts at seeing through the heavy vellum parchment well enough to make a proper tracing and, seeing the futility of that, looking to the scaled-down print-out I’ve been given for guidance and clearer direction. I think about the different types of mimicry performed when serving self-directed creative apprenticeship- copying hot rods out of magazines into a spiral notebook, figuring out the chords to Iron Man.

- In certain places, it’s hard to know where beard ends and headscarf begins. Does it matter, really? Maybe just as a place marker- away from easier facial features, the less recognizable passages are places I get lost. I notice I’m resorting to language as an aid to memory, as naming assists in the transfer at that moment my eyes move from the smaller reproduction to the surface of my drawing.

- Esber is a sadist! How else to explain this project, with these parameters, following this drawing? Trying to make sense of the virtuosity underneath against this mess I’ve made on top. The tangled eyebrows are especially challenging- I decide to simply go my own way. And the lower half- a place to get lost, an interminable Tora Bora. This is the first time the subject of the drawing has really even crossed my mind.

I am estimating the drawing will take between two and five hours to make. I want it to be an enjoyable process, so if it appears to be taking longer than this, you are probably being too precise or too cautious.

- I’m coming close to the finish now, somewhere into the seventh hour. Too precise, but not precise enough. Too cautious? Maybe so. It has its moments though. It’ll look best hanging high on the wall, and not directly next to his. 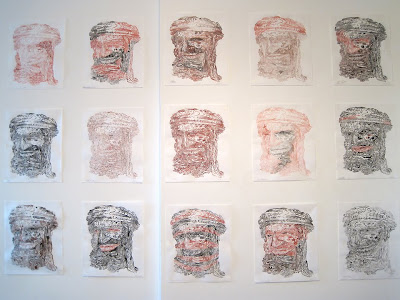 Other drawings hanging in James's studio.