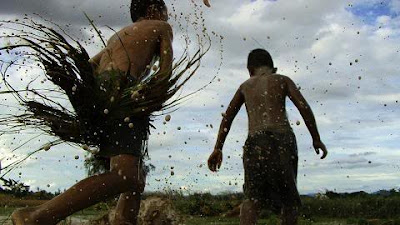 A year ago I took inventory of works I enjoyed over the previous twelve months which were ineligible for the year-end best-of lists- unseen classics, little-known gems, YouTubes, and what-not; it was too much fun not to do once again, so here are some personal viewing highlights, numbered but unranked. Happy New Year to all!

1) Agrarian Utopia- Uruphong Raksasad: Drama or document? As I watched this film I cared less and less about that distinction. Loose script, nonprofessional actors, space for improvisation- this approach is not so unusual now, but what IS unusual is the loving care given to depiction of the workaday world. The title plays two ways: perfectly descriptive for extended stretches where the lives of these Thai subsistence farmers—cultivating a rice crop, catching frogs, gathering honey—appear as sheer bliss; when the outside world intrudes—via forces of globalization driving crop prices downward and rendering their livelihoods unsustainable—it rings with bitter irony. Truly a highlight of this year’s Flaherty Seminar.

2) Dusty and Sweets McGee- Floyd Mutrux: Conventional wisdom might tell us that one intimate look into the lives of junkies would be enough to meet demands of the moviegoing public at any given time; as luck would have it, this $16,000 econo-masterwork was released in the same week as Panic in Needle Park (and disappeared soon after). This is one for the time capsule–to go alongside William Eggleston’s Stranded in Canton and Neil Young’s Time Fades Away–as tales of hard drugs and spiritual depletion. Featuring brilliant camerawork by William A. Fraker (along with unpaid and uncredited contributions by Vilmos Zsigmond and Laszlo Kovacs), Mutrux (like Raksasad) relied heavily on nonprofessional actors- in some cases, real users; even with $400-a-day consumption, The Habit was, as it turned out, more cost-efficient than The Method. The film leisurely cross-cuts amongst several characters, eventually gravitating toward a young woman worthy of Botticelli (track marks discreetly hidden) and her dumb-ass boyfriend (complete with ochre Mustang and bleeding swastika tattoo) in their search for dope and a place to shoot it. Its use of pop music is often extraordinary- Van Morrison’s Into the Mystic will never be the same for me again. Thom Andersen deserves our gratitude for making the Walter Reade screening happen. 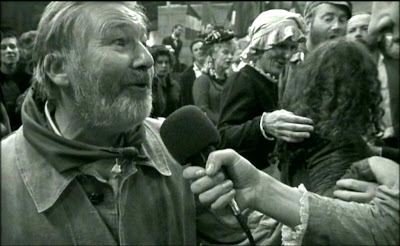 3) La Commune: Paris, 1871: Peter Watkins: Infusing the production process itself with the idealism and spirit of his subject, Watkins went perhaps as far as any filmmaker ever has in marrying radical content with an equally radical form. Presented by way of competing news broadcasts, this creative anachronism (first introduced with his Culloden back in 1964) presents its history while at the same time performing a kind of reverse engineering to its narrative mechanisms. The stage, built inside a factory in the Paris suburbs, evokes the spatial inequities of the newly Haussmannized city; for all it Brechtianisms, the climax is emotionally devastating. Hats off to 16 Beaver, who hosted the screening in conjunction with Doctruck, Red Channels, and Brecht Forum.

4) The Hellstrom Chronicle- Walon Green: Pestilence straight out of Exodus, recast as a near-future doomsday prophecy- this 1971 landmark in experimental nonfiction was tremendously popular upon its release (and shockingly, won an Oscar for Best Documentary Feature), so why, to this day, no DVD? Lawrence Pressman is superb as the entomologist Hellstrom. 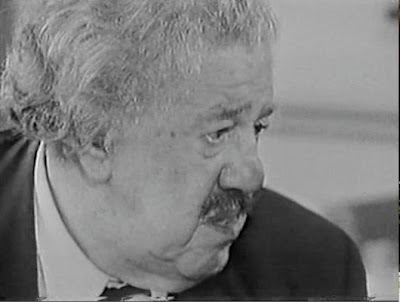 Still from A Portrait of Michel Simon by Jean Renoir... by Jacques Rivette

6) A Portrait of Michel Simon by Jean Renoir, or A Portrait of Jean Renoir by Michel Simon, or The Direction of Actors: Dialogue- Jacques Rivette: For sheer Franco-star power, it’s hard to beat this one- edited by Jean Eustache, it also features (along with the principals) Henri Cartier-Bresson. Originally produced for French TV though never broadcast, Rivette’s look back at this five-time collaboration is remarkable in the way it conveys their delight in one another’s presence. 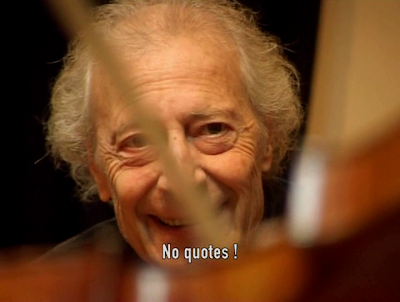 7) Luc Ferrari facing his tautology: two days before the end- Dominique Lohlé and Guy Marc Hinant: Best known as a musique concrete pioneer, Ferrari’s output was considerably more varied than that. Here he’s seen working with two gifted improvisers (Jean-Phillipe Collard-Neven and Vincent Royer) towards a new realization of his Tautologos III of 1970; akin to Pedro Costa’s recent Ne Change Rien, Lohlé and Hinant give us privileged access into the slow transformation of ideas into music. This is one of the finest documents about the creative process that I know of, and a monument to a great composer just before his death. 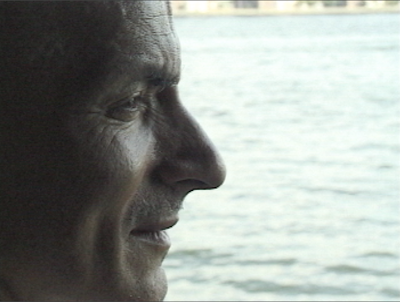 Still from Threads by Caspar Stracke and Mike Hoolboom


9) Alex Chilton- My Rival- William Eggleston: Too soon, too soon… leftover footage from Stranded in Canton, Eggleston’s epic tour through the demimonde of Memphis. A rousing performance by Chilton with Sid Selvidge (heard but unseen) on piano, its eerie light (courtesy of an infrared lamp retrofitted to his Portapak) seems now of another world. 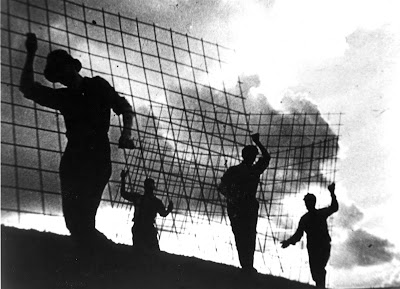 Still from Reichsautobahn: Highways of the Third Reich by Hartmut Bitomsky

10) Reichsautobahn: Highways of the Third Reich- Hartmut Bitomsky: In our current political climate, the notion of public works programs as a means to economic stimulus elicits predictably fractious debate, but knees don’t jerk so predictably when the Third Reich is its state sponsor. Shrouded in myth, celebrated in song, the Autobahn embodies German know-how in the popular imagination, and Bitomsky’s nuanced cine-essay digs deep into German archives to extract poetry from unlikely places and sort out truth from all the rest.

11) A Deadly Invention (aka The Fabulous World of Jules Verne)- Karel Zeman: Who needs After Effects? Loosely adapted from Jules Verne’s Facing the Flag (other Verne fans have identified bits of several other of his novels in the plot, such as it is), it’s easy to get carried away by the sheer technical inventiveness of this live action/animated hybrid; what’s remarkable is how completely Zeman evokes the world Verne has created. This “Magic-Image Miracle of Mystimation” (as its posters put it) is the most child-like fun I’ve had at the movies this year- submarines, pedal-powered flying machines, hideaways nested inside volcanoes, and exquisite Meliesian sets painted to resemble Victorian engravings- plus an A-Bomb-like explosive device that drives the story (and I’m leaving a lot out). Keep your eyes peeled this spring when Spectacle Theater mounts a full-on Zeman retrospective.

12) Schmeerguntz- Gunvor Nelson and Dorothy Wiley: If Pop Art celebrated consumer goods at the point of purchase, this 1965 film (both artists’ first) fixates on their aftermath from a decidedly feminist perspective. Replete with dirty diapers and stopped-up kitchen sinks, Schmeerguntz recalls a 1957 passage from the journals of Sylvia Plath in which she viscerally recounts being sickened by fatty food; it anticipates, too, the work of Martha Rosler, some ten years before the fact.

13) Worst Band Ever butchers Pink Floyd- “MUSIC” declares the sign behind the band, in case there was any doubt. Skynyrd seems their speed, more so than Floyd; “The Wall” consists of hay bales and pumpkins. No doubt this will be the most reviled item on the list, and I’m hard pressed to explain why I like it- all I can say is that it takes a song by a band I despise and injects it—especially the guitar solo—with some sort of genuine pathos. Thanks go to Monica Frost for sending it along. 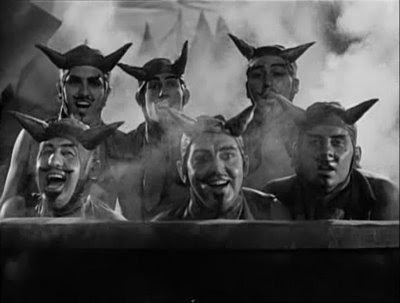 Still from Hellzapoppin’ by H.C. Potter

14) Hellzapoppin’- H.C. Potter: Released less than three weeks after Pearl Harbor, this adaptation of an already-crazy Broadway hit upped the ante to stage its own all-out attack; clearly the older Hollywood sibling of Bruce Conner’s A Movie, it wreaks havoc on continuity, genre conventions, and taste. The Hell sequence is indescribably great, and the Lindy Hop unlike any dance number seen in an American musical. In light of Leslie Nielsen’s recent passing, it’s fun to imagine this as Airplane!’s in-flight movie. Big thanks to Light Industry, and to Ken Jacobs for sharing the print from his collection.


15) Pete Drake (performing Forever): Peter Frampton met prolific Nashville session man and producer Drake, as he recounted, during a recording session for George Harrison’s All Things Must Pass, and the rest, as they say, is history. “Show me the way”, Frampton famously implored; here Drake obliges. For Marianne.