"On a Phantom Limb" by Nancy Andrews 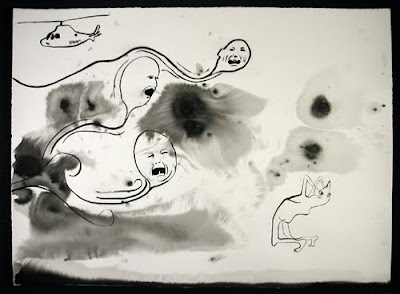 
Here is an essay entitled Contemplating One's Own Skeleton, which I wrote for the DVD release of On a Phantom Limb, a 2009 film by Nancy Andrews; the film will have its New York City premiere on September 23 at Anthology Film Archives, along with her just-completed film, Behind the Eyes Are the Ears and Dave Fleischer's Snow White. This is a don't-miss program- I hope to see you all there.

from The Haunted Camera by Nancy Andrews


Let’s begin with these words, voiced by one Ima Plume, and zero in on a key tension at play within the films of Nancy Andrews. For now, we’ll ignore the failure those words imply and turn instead to her pursuit of the unknown, the invisible, the what-lies-beyond, qualities that impel her larger creative project.

Her most recent film, On a Phantom Limb, looks far beyond the visible. But what might this mean, given the extensions available to our senses by way of technology? Viewing the contents of a sealed handbag at a security checkpoint, remote locales mapped by hi-res aerial photos, or an exploding star via radio telescope, we are shadowed by an omniscience once linked to God and the novel, blasé toward a shrinking frontier.

Long drawn to the unfathomable and the unaccounted-for, Andrews considers what our technological apparatus hasn’t mastered and cannot access. In her film entitled The Dreamless Sleep, she paid tribute to Else Bostelmann, a forgotten illustrator who drew—sight unseen—the sea creatures described via telephone connection by the early underwater explorer William Beebe during his pioneering descents in a bathysphere. Surely her interest in Bostelmann stemmed as much from the excitement of Beebe’s discoveries as from the fact that these images weren’t photographed, but imaginatively interpreted by way of drawing, under circumstances much like a stenographer receiving dictation.

Late in 2005, illness brought Andrews face-to-face with the what-lies-beyond; On a Phantom Limb depicts that moment with the simple shock of black paper ripped away to reveal the words, I thought I’d died scrawled beneath, a gesture recalling a pain that signaled something was dreadfully wrong. Flown by helicopter for emergency surgery some 200 miles away, she was held while doctors waited for her condition to stabilize before operating; it never did. Her body temperature was then lowered precipitously, inducing temporary cessation of heartbeat, breathing, and brain function so the surgery on which her life depended could then be performed. Several days later, another operation was necessary to address complications that arose with the first; following that, her slow recovery began. Under heavy sedation, suffering intense hallucinations and delirious for weeks on end, the shock of such extensive bodily and emotional trauma left its lasting mark. 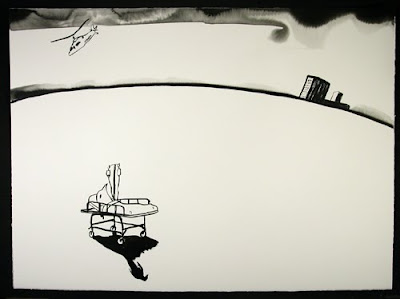 
Andre Bazin once asserted that, “If the plastic arts were put under psychoanalysis, the practice of embalming the dead might turn out to be a fundamental factor in their creation. ...[P]roviding a defense against the passage of time...satisfied a basic psychological need in man...to snatch it from the flow of time, to stow it away neatly, so to speak, in the hold of life.” For Bazin, this impulse to preserve—traceable at least as far back as the mummies of ancient Egypt—reached its zenith with the development of photography (and by extension, cinema); further on, he likened the medium’s indexical nature to that of a death mask. Andrews, having spent weeks perilously close to death, essentially assigned herself the task of evoking the fear and vivid sensations forever inscribed in both muscle and mind. To report one’s subjective state by way of a medium whose objectivity is its strength: how might Bazin’s formulation apply to a film that represents life prevailing—albeit temporarily—over death itself?

Midway into On a Phantom Limb, a series of closeups follow the trail left from the surgeon’s scalpel across the filmmaker’s body: a scar running from the shoulder blade, down and around the rib cage, and extending below the navel. In the words of her internist, “...this gets you about as deep into a human body as you can get”, offering not just visceral evidence of trauma, but an affirmation too of the power of cinematic realism as claimed by Bazin.

The scar, though, has a dual nature: we follow its serpentine course, yet it indicates nothing of the drifting twilight of days in intensive care or the emotional suffering and paranoia that colored them, much less a framework to help make sense of all that happened; it is both explicit narrative and shut-up secret. To the extent that those secrets are revealed, it must occur by other means.

The sequence which follows inverts what precedes it: using WWII-era archival footage of a workshop for prosthetic limbs, the contours of new body parts are traced out on flat sheets of plastic, echoing the line of the scar traversing her trunk much in the way that a flat map projection relates to a globe. But there’s something more here, beyond a simple rhyming of forms; we’re asked too to consider the nature of prosthetic augmentation- of inert, foreign materials joined to the living continuum of one’s body. Along with that, there is material that Andrews herself created: a woman plotting out the contours of a large head of a bird and beginning its construction, shot to match the archival scenes. The critic Gilberto Perez once described the crosscutting of D.W. Griffith as “a rupture looking forward to its mending”; these words recall both the bodily repair depicted within On a Phantom Limb and the grafting together of seemingly incongruous discourses, cinematic and cosmological.

On a Phantom Limb has little to do with the laws of narrative gravity as defined by Griffith and others. The film as a whole is (as with her previous work) a stylistic and discursive hybrid, a montage of attractions; live action, archival material, puppets, and various types of drawn animation are combined in sometimes tenuous ways, summoned by outright necessity. But what, for our purposes, lies beyond the visible, and how can it be accessed? 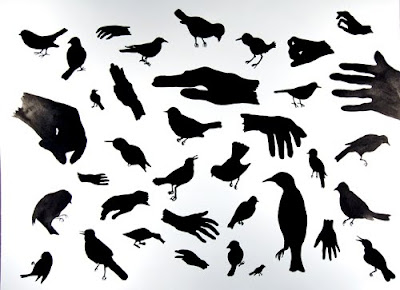 
For Andrews, Mircea Eliade’s Shamanism was crucial in the film’s conception and in bringing us closer to a sense of emotional truth. Surveying shamanic initiation rituals the world over, Eliade identified several of its aspects common from one culture to the next: sickness and delirium; symbolic death of the neophyte; ritual dismemberment of the body; renewal of the organs; resurrection. Within these recurring threads, the filmmaker recognized uncanny parallels to her own encounter with death, as well as an imaginative framework for reconsidering that experience through the medium of film.

On a Phantom Limb hovers in an indeterminate zone, less a place than a state of consciousness. The avian imagery seen throughout is part of this- even more than in her previous films, where birds are quite prominent. In shamanic lore, birds often act as go-betweens moving from Earth to heavens to underworld; the film itself functions in much the same manner.

A biform creature—part bird, part woman—appears as both drawing and in live action - posing heroically, flying a kite (modeled after herself), and rocking out with guitar and drums in a giddy musical interlude. The costume from the workshop sequence—much like the shaman’s costumes described by Eliade—is donned by the filmmaker herself, complete with a superhero’s cape. Elsewhere, that body is reassembled limb by limb by a large raptor, itself augmented with mechanical parts- a tutelary spirit perhaps, and clearly an allusion to lived experience.

Reading Eliade and the varying accounts of shamanic practices, one can’t help but wonder what to make of the dissonance in recall between initiate and profane witness. On a Phantom Limb recasts this dissonance, turning the mortal encounter of another inside out, and creating a means through which to imagine what we will inevitably face ourselves.
Posted by Jim Supanick at 10:07 PM