Evolution Griller the Master Killer, Gothic Futurist, #1 Stain On The Train: these and other monikers belonged to Rammellzee, whose passing on June 27 marked a rupture in the Afro-futuristic continuum joining the likes of Sun Ra, Drexciya, and Anthony Braxton. Too little known outside the circles of graffiti and Hip Hop cognoscenti, I first learned of his existence back in 1983 when he was invited by Francesco Clemente to Skowhegan (of all places) to speak about his work. Far beyond my ability to summarize, let’s just say he blew many minds that day, and confirmed the sneaking suspicion that my provincial, Bauhaus-derived art schooling was leaving me ill-equipped for the slippery but very real issues at stake; what follows is a modest attempt to come to grips with that unforgettable summer afternoon.

For me and the legions of MFAs saddled with student loan payments to last their lifetimes, it was galling to encounter the kind of effortless originality that Rammellzee embodied; in 1997 he told Peter Shapiro that he believed himself to be a “real monk from the 14th century. I know too much, put it this way. There’s no possible way that, if I didn’t go to school, I’m going to know all this shit, since I don’t read and I only look at that [he points to a dictionary], and that’s not a book you read.”

Rammellzee won early notoriety in the late 70s as a scourge of New York City law enforcement, trespassing through MTA train yards, tagging trains from top to bottom- in color, courtesy of Krylon. He saw that activity as a form of warfare, a pitched competition in which fellow bombers decided the victors. As the art world briefly tapped that talent pool (hoping to interject some “street authenticity” amidst the faux primitivism and flailing gestures of Baselitz, Chia, Basquiat, and company), Ramm was critical of old friends who succumbed to the endless flow of cash, squandering credibility with tossed-off works that paled under the track lighting of Soho and East Village galleries.

During these years he devised what he called Ikonoklast Panzerism (or alternately, Gothic Futurism). In the spirit of Sequoyah, inventor of a system of writing for his Cherokee kin extracted from shards of the English alphabet, his aim was to “armor the letter”, mounting a symbolic defense against co-optation by the art market and, in a broader sense, the culture’s tendency to deploy language as a weapon against those less powerful: “...there was another type of war, a political war of languages, where – let me say I’m not a racist, but I am racing - certain people had used language in a dominating effort to take over other languages or pictograms, and now there is a problem in schools where African languages are not allowed...” 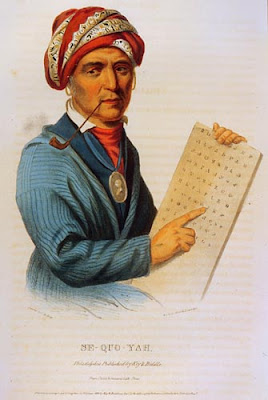 Sequoyah- lithograph from a painting by Charles Bird King

Ramm was Kabbalistic in his belief that the alphabet itself was encoded with layers of significance all but obscured through the debasement of its everyday use. The ideas contained in that subway handiwork (now long gone, as are the trains it covered) were later laid out in his Ionic Treatise Gothic Futurism Assassin Knowledges of Remanipulated Square Point’s, as grammatically freewheeling as the title suggests. Its language is not so much written as sculpted, an accretion of science, mysticism, neologisms, and puns; its voice is oracular, and not a little paranoid. Here’s what he said about the letter A:

Last year I introduced the Ionic Treatise to my Writing and Practice class at Brooklyn College alongside Henri Michaux’s Stroke by Stroke, fitting by virtue of a shared distrust of language, and through the ways their drawing and writing worked in relay with one another. A passage toward the end of Michaux’s book—from a piece entitled Of Languages and Writing: Why the Urge to Turn from Them—would surely have met with Ramm’s approval:

A business enterprise now, language, unbeknownst to anybody, takes the place of murmurs, laments (faint or clear), calls. Commanding, commandeering.

Destined to become an ADMINISTRATION into which every conscience must enter.

Master of the situation, language will answer every need (!). Like tyrannies.

The handcuffs of words are on for good. 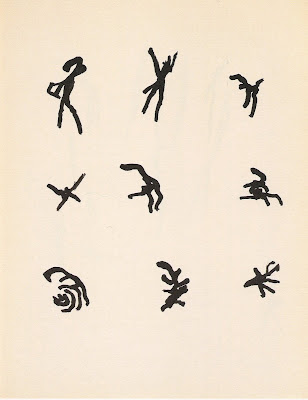 Aligned as their attitudes might have been, key differences in the conclusions they drew came through in how they handled their materials. Through the fluidity of ink and brush, Michaux’s hand fought the letter and all it signified. Drawing back toward a liquid state, to the letter’s prehistory as pictogram- this was passive resistance in graphic form. Rammellzee played the warrior, ready to reclaim and defend; his letters appeared as a bulwark, impermeable hardness rendered with a mist of aerosol.

The militarized imagery ran through Ramm’s later work as well- in the Letter Racers (a personalized variant of Ed “Big Daddy” Roth’s Monster Model Kits), in the samurai-inspired body armor fashioned from neighborhood detritus, and in Alpha’s Bet, the dystopian screenplay for a never-realized film (though a short animated version was produced by Celia Bulwinkel.)

Sadly, this work has been ignored by New York museums (save for a couple of group show appearances); will some city institution—the New Museum, the Whitney, the Studio Museum, MoMA—at last wake up to one of its own?