The word “orphan” typically evokes pity for the unfortunate and unloved; when it comes to orphan films though, there’s no lack of love, as was evident at the Seventh Orphans Film Symposium held in April at the SVA Theatre in New York City. Founded by Dan Streible and colleagues from the University of South Carolina in 1999, the Symposium embraces nearly any moving image produced outside the entertainment-industrial complex, attracting Méliès experts, decaying nitrate fetishists, and home movie buffs sharing tales of close calls with customs officials, rusty film cans discovered in sweltering sheds, and heroic restoration of works written off as lost long ago.

Game shows from the Sandinista regime, footage shot by Danny Williams of an early Velvet Underground rehearsal, Henri Cartier-Bresson’s first film, produced to raise funds for the Lincoln Brigade, and a lysergic collaboration by Pat O’Neill, Chick Strand and Neon Park commissioned by Sears as an in-store promotion for a new line of jeans: those were just a few of the many highlights this time around. In some instances the story of a film’s discovery could be more compelling than the film itself; throughout it all, the detective’s instincts prevailed.

Passionate belief in preservation sprung up from the podium and in casual conversation, whether explicitly addressed, or implicit in the presence of so many intelligent people pursuing this less-than-lucrative path. A basic question arose again and again: what constitutes an archive? Precipitated not so much by theoretical inquiry than more practical concerns, film archives are all too often defined by a lack of material resources, in some instances consisting of little more than a single individual’s desire to save a few odd reels.

The acquisition of the entire Twitter archive by the Library of Congress, announced that same week (a Borgesian nightmare if there ever was one), only served to remind us of—in contrast to the digital world—the material obstacles of film preservation; the Symposium was a veritable survey of the ways in which a film could disappear. Most often it happened through simple neglect of some form or another; too often though, its destruction was intentional.

It’s astounding that film and video could be valued more as raw material than for what it recorded- recycled for its silver, rerecorded upon to avoid purchase of new tape stock, or otherwise destroyed. In Standard Gauge—not included on the bill, but as persuasive a case for the Symposium’s existence as you’ll ever see (and a great film to boot)—Morgan Fisher describes watching Technicolor lab employees hack old release prints to pieces with meat cleavers. Through that act of mutilation we can glimpse, conversely, a tacit admission of value. And if this was the way the studios treated film (or as the business side of media archives refers to their holdings, “assets”), one can only imagine the many paths to oblivion for the moving image produced outside of Hollywood.

So if the notion of posterity has been antithetical to the moving image for much of its history, it was all the more surprising to see something like The Janitor, which opened the proceedings (I’m too weak to resist) with a bang. Possessing a certain raunchy splendor, this early stag film produced circa 1930 (with superb piano accompaniment by Ed Pastorini), is one of the rare works from the Kinsey Institute’s archives to be screened publicly; its illicit nature is in fact what saved it from disappearing altogether.

With The Investigators, the archive functioned again as a repository for secrets (though for very different reasons). Presented by Charles Musser, this remarkable 1948 lampoon of the HUAC Hearings suggests a collaboration between Dr. Seuss and Bertolt Brecht. Unseen since its completion, the Union Films collective responsible for its production (with Abel Meeropol, Max Glandbard, and Carl Marzani among its principals) realized that to screen it publicly would mean a sure spot on the blacklist. Herschel Bernardi, playing the Chief Investigator (and who appeared 28 years later in The Front), gives a fabulous performance; his interrogation, joined by two actresses (excellent as well, but sadly uncredited), infuse the proceedings with an undeniable energy- part cinema, part theater, all unapologetic agitprop.

Orson Welles’ Sketch Book, presented by Stefan Drößler, offered defiance of the state in an altogether different form. Produced in 1955 as a series for the BBC but sadly lasting just six episodes, Sketch Book proved once again (as if it were necessary) that storytelling was second nature for Welles. Here, he’s alone, addressing the camera directly, with occasional cutaways to the drawings he’s making to illustrate the story. In the episode screened at Orphans (filmed a day after his fortieth birthday, and the day before his third marriage), Welles offers an extended riff on the erosion of privacy and the rise of state surveillance by way of a rather funny anecdote in which he claimed to border agents that he was carrying in his bag a small atomic bomb. Behind the antagonism towards these petty bureaucrats was his ever-present mischief, undiminished from the days of his infamous The War of the Worlds broadcast.

Perhaps my favorite presentation was Thomas Elsaesser’s Islands of Media-Memory and Natural Remains: Pathways to a Berlin Cine-Chronicle. Natalia Fidelholtz of Storycorps (who’d initially reviewed and catalogued this material), began by presenting what seemed like little more than documentation of a cozy bourgeois idyll from the 1940s- charming yet not so unusual, save for the color stock on which it was shot.

Elsaesser then took to the podium, revealing that these were home movies of his family, shot on an island in Berlin proper during the Second World War; knowing this, the footage appeared in an altogether different light. There was little if any indication of the hardship or fear one would assume visible during that time; the period documented in the films was in fact one of courtship for his parents- Elsaesser himself was born in 1943. 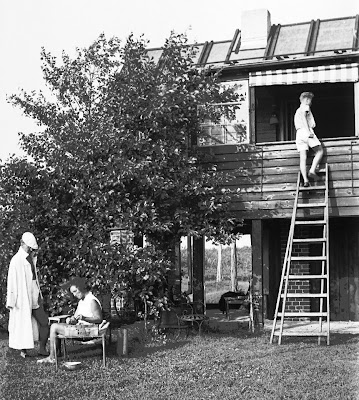 Proceeding with further backstory, he recounted memories of his architect grandfather Martin Elsaesser and other family friends who appear before the camera. Unusual amongst those contemporaries unaffiliated with the Party for his decision to stay in Germany, the Nazi years were for the elder Elsaesser an internal exile, fallow in terms of commissions but creatively productive nonetheless.

It was fun to see one of the greatest of film historians incorporate Wikipedia screen grabs into his PowerPoint presentation, and fascinating to contemplate the emotional resonance of this footage for Elsaesser, gazing at his own prehistory. Given his tremendous contribution toward our understanding of the New German Cinema, there’s a beauty in locating a fragment of the real history from which it arose. And to follow the notion of familial origins that the term “orphan” implies, Berlin Cine-Chronicle reconnects an island of apparent (if not actual) bliss to the mainland of calamitous history.
Posted by Jim Supanick at 9:20 PM