Shortly after the release of Jacques Tati’s Mr. Hulot’s Holiday in the summer of 1953, Paris was hit with a massive strike that paralyzed municipal services, including trains moving in and out of the city. Parisians unable to leave town that August during the height of the summer season had Tati’s film as a vicarious substitute, and it seems safe to say that for some, this groundbreaking comedy was the better option. 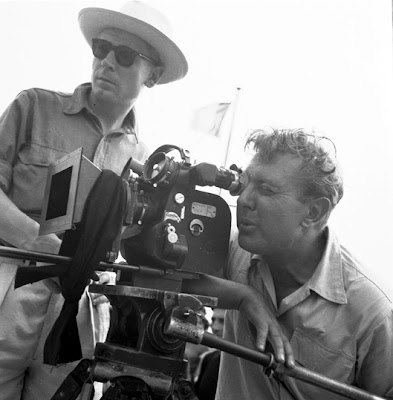 Part slapstick, part social satire, Tati depicted in hilarious microcosm an uptight nation unable to relax. Unlike the seaside hijinks contained within Jacques Henri Lartigue’s incomparable photographs, Tati’s shoreside inn-mates are a crabby bunch, incapable of leaving their workday rhythms behind. In the words of André Bazin, we’re witness to “…a feebly whirling duration turning back on itself, like the cycle of the tides… a conventional pleasure more rigorous than office time.”

These looping rituals are underscored by Alain Romans’ infectious song of summer, emanating so playfully from every possible source, both within the story space and outside of it; this is just one aspect of a meticulously wrought sonic fabric that would become the director’s trademark. Tati inverted the usual hierarchy of cinematic sound, with noise given unprecedented importance, and human speech relegated to a subordinate role. 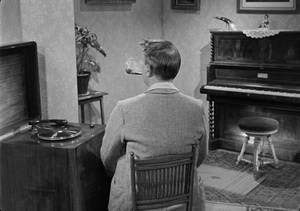 In the years immediately preceding the film’s release, fellow countryman Pierre Schaeffer was sounding out his own hierarchical inversion by way of a radical new approach to composition called musique concrète; here, the staves of traditional musical notation were jettisoned in favor of working directly with the sounds of the world recorded onto shellac disk and magnetic tape. These and other pioneering methods were intended to “…open music up to all sounds”, sending pitch-perfect conservatory-trained performers running in the other direction.

Some years before, as Goran Vejvoda and Rob Young have recalled, Schaeffer had engineered the radio broadcast announcing the Liberation of Paris by Allied forces. Embedded in that program of news, music, and patriotic readings were coded signals agreed upon beforehand that, in a relay of sonic joy, directed parish priests to set their carillons ringing. It’s lovely to imagine this moment—seemingly straight out of a film Tati might later make—as one the director would carry with him for many years to come. The truth though was that Tati, who in the war’s early days wrote a scenario proposing his own fantasy inversion of a Germany occupied by the French, had wisely fled Paris to the village of Sainte-Séverè the year before to avoid recruitment for “volunteer duty” in a German factory; he missed the Liberation, but managed to find a setting and inspiration for later use in his first feature, Jour de Fête.

Jean-Luc Godard once wrote of Tati that, “He sees problems where there are none and finds them.” With his drastically pared-down shooting style that some mistook as primitive, Tati, along with his onscreen envoy Mr. Hulot, together joined forces to turn the tide of habit. The radical director teaches us the rules of their new game at the same time we begin to play it. In Mr. Hulot’s Holiday, this play includes noisy ping-pong matches and a recalcitrant old car. Both Tati’s cinematic conceits and Hulot’s character were grounded in a commitment to tireless observation, and Tati’s achievement was that through the two together, their eyes and ears become ours.

In the period following his Liberation broadcast, Schaeffer experienced his own, recounting in a 1984 interview with Tim Hodgkinson that, “I was horrified by modern 12-tone music. I said to myself, ‘Maybe I can find something different… maybe salvation, liberation is possible.’ Seeing that no-one knew what to do any more with Do-Re-Mi, maybe we had to look outside of that…”

Jean-Christophe Thomas has written that musique concrète, “maintains a unique way of hesitating between poetry, literature, and sound art”; I would add that there’s a bit of cinema there as well. Sadly though, Schaeffer in the end felt as confined as his listeners by having been “born in Do-Re-Mi”, and the impossibility of “distancing oneself from the dramatic.” In later years he expressed doubt that his compositions could be rightfully considered as music: “Unfortunately it took me forty years to conclude that nothing is possible outside DoReMi… In other words, I wasted my life.” 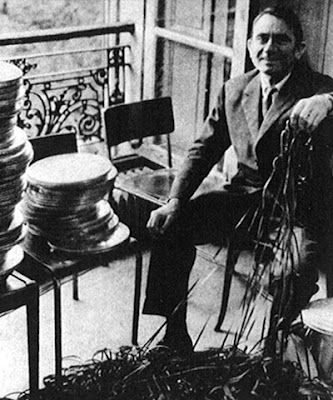 Perhaps Schaeffer’s failure was less with the music itself than in his inability (or refusal) to embrace the dynamic mutability of musique concrete that Thomas identified as hesitation. And wasn’t it significant to have taken those crucial first steps? Better to think of it instead as an unfinished but ongoing project.

(This is an expanded version of some program notes originally written for a Pratt Film Society screening in 2005.)

A newly restored Mr. Hulot’s Holiday will be screened as part of a Jacques Tati retrospective at the Museum of Modern Art from December 18 – January 2, and at selected theaters elsewhere.
Posted by Jim Supanick at 11:37 PM