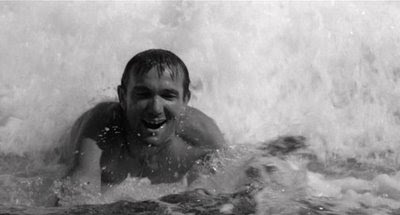 Still from I Fidanzati by Ermanno Olmi

In an early episode of Jean-Luc Godard’s Histoire(s) du Cinema, Serge Daney suggests (speaking of the series) that as a member of the New Wave generation, Godard was uniquely positioned historically to attempt such an ambitious project:

“...there are suddenly too many films to see or catch up on this heritage-turned-monster that was the history of cinema. Before the 60s you had only four or five main countries producing films but then cinema became a world-wide industry. It’s impossible for a young person today--short of spending 10 to 15 years watching films--to catch up on everything they haven’t seen whilst also establishing an axis on which to situate their own history…”

Though I’d argue that pre-1960 cinematic history wasn’t quite as contained as Daney would have it, his characterization of the present is right on the money. This rings especially true as 2009 comes to a close (and along with it, the decade); have you noticed that at times like this, people like to make lists? Film Comment magazine requested a number of my own, to be tallied and puréed into spreadsheet form along with those of dozens of other film writers, with the result being a series of master lists representing some sort of cine-critical mass- “best films of 2009”, “best films of the decade”, “best of the avant-garde”, and so on. It’s time-consuming but fun, yet I can’t help but notice how little it resembles the sum of what I actually watch, which involves not only a lot of happy wrestling with that heritage-turned-monster, but looking beyond what most people think of as “cinema.” With that in mind, here’s a list of favorites seen this year, regardless of when (or how) they were made:

1) I Fidanzati- Ermanno Olmi: Love and longing expressed through flashbacks and an exchange of letters, Olmi’s follow-up to the just-as-great Il Posto is set against the “economic miracle” of early 60s Italy; so heartfelt, and so perfectly crafted- how did he do it?

2) Joy Division’s Transmission (performed by Steel Harmony): Rolling slow through the streets of Manchester, this steel drum ensemble plays the shit out of one of the very best songs to originate from that city. Part of Jeremy Deller’s Procession, it sings with all the joyous abandon found in a New Orleans funeral parade on their way back from the cemetery. Thanks to Amy Monaghan for this.

3) A Lecture- Hollis Frampton (Anthology Film Archives 3/28/09): A recording of HF’s 1968 illumination of spectatorship and the cinematic apparatus, originally presented at Hunter College; if that wasn’t enough, it was sandwiched in between an excellent introduction by Mike Zryd, and followed by Ken Eisenstein’s brilliant presentation linking Frampton’s lecture with Jorge Luis Borges’ The Aleph. 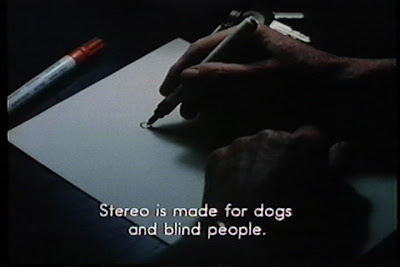 Still from Final Thoughts: Series One by Steve Reinke

4) Final Thoughts: Series One- Steve Reinke: A compendium of short videos that hang together as a surprisingly coherent whole, Reinke forges ahead with his often funny, sometimes shocking, yet always smart associative method, despite a (facetiously?) asserted “death of the reader.” Some of us are still hangin’ on there, Steve.

5) A Divided World- Arne Sucksdorff: Synthesizing plein-air cinematography and close-ups staged in the studio, this all-but-forgotten Swedish master depicted animals struggling for survival over the course of a winter night. Reminiscent of the river scene in Night of the Hunter, this is nature film as glorious contrivance; it really shouldn’t work, but it does- magically. Big thanks to Scott MacDonald for sharing this rare print. 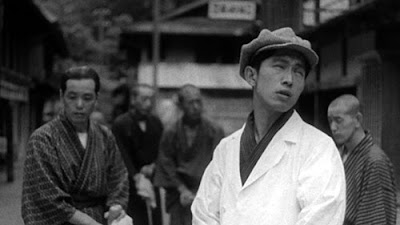 Still from The Masseurs and the Woman by Hiroshi Shimizu

6) The Masseurs and the Woman- Hiroshi Shimizu: A pair of blind masseurs seek work by following a seasonal itinerary between mountain and seaside resorts; along the way, their encounters with spa clientele and staff--as well as the frank treatment of daughters sold off into prostitution--are drawn with compassionate nuance. Shimizu seems to have understood something about blindness, and even more about seeing- his visual sense is truly exquisite.

7) Promised Lands- Susan Sontag: She made films too? And how! Thanks to Light Industry for resurrecting this 1974 documentary gem about the Yom Kippur War and its aftermath. While Palestinian voices are conspicuously absent, it’s somewhat mitigated by what we do hear and see, including a deeply affecting look inside an army psychiatric hospital where battle-traumatized soldiers undergo treatment.

8) White Lightning-The Fall (music video): Someone had the right idea here: great song by the Big Bopper, ripe to be the very hit that gave the world George Jones; the mighty Mark E. (Jones’s heir apparent, at least in the saloon) seems unusually sober here, unlike the cartoon lightning and lovably dopey rear-screened bikers. Chug-A-Lug, Manchester style, could be the perfect a follow-up. Why aren’t I a record producer?

9) Anita Needs Me- George Kuchar: Don’t let the very un-Kucharesque title fool you- young George, circa 1963, makes good on his promise that, “your emotions will be squeezed.” John Waters said it alright- how much longer must GK wait for that MacArthur grant? 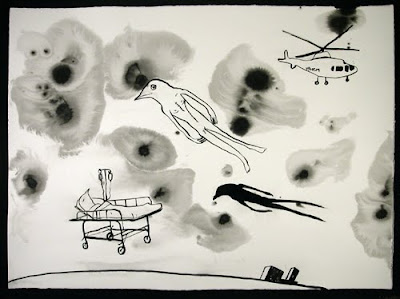 Drawing for On a Phantom Limb by Nancy Andrews

10) On a Phantom Limb- Nancy Andrews: This film is an autobiography, as one intertitle reads; really, it’s one harrowing chapter. Live action and various forms of animation are combined for this account of a grave medical emergency in which, as the filmmaker says, I thought I’d died. Lucky for us, she didn’t, with the film as an added bonus. Andrews is absolutely one of the best filmmakers out there now, and this one is among her most powerful- stay tuned for more about it in the coming weeks.

11) Doublestream (Part II of Caspar Stracke’s Circle’s Short Circuit: Torsten Burns reedit)*: In celebration of the original version’s 10th anniversary, Stracke has initiated a new reedit, assigning each of the five sections to an individual or team (Burns, Jenn and Kevin McCoy, eteam (Hajoe Moderegger and Franziska Lamprecht), Leslie Thornton, and myself); as the project nears completion, it’s hard not to be excited, especially after viewing Burns’s contribution, a delirious homage to the DeLorean as a modern dance video. Of all his work I’ve loved over the years, this is close to the top- look for this new version in 2010.

12) Multiple Sidosis- Sid Laverents: Man With a Movie Camera, as reconceived by a former vaudeville performer/one-man band. This small-gauge tour-de-force documents its own birth, or more precisely, the song that drives it. The meticulous layering of both music and image was all done at home--with patience, with love, and with goofy humor--in a San Diego suburb. Sid lives! 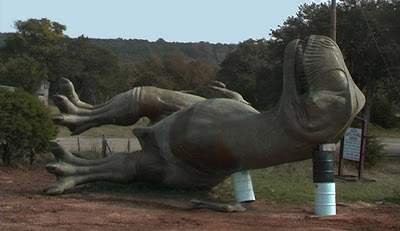 Still from The Earth is Young by Michael Gitlin

14) The Earth is Young- Michael Gitlin*: Back in October I was fortunate to have been asked to moderate an after-screening discussion with the filmmaker at 16 Beaver. Studying it closely after a first viewing back in the spring, I was deeply impressed by Gitlin’s risk-taking approach and the film’s ability to challenge our presuppositions and stir debate, which it did, in spades. A terrific film, and a marvelous evening all around.

15) Our Hitler: A Film From Germany- Hans-Jürgen Syberberg: This neo-Wagnerian mini-series appeared on German TV the same year we Americans watched Roots; dirty laundry on prime time, but only Syberberg had the gumption to cast his arch-villain as a ventriloquist's dummy. “Filmed theater” is one of the harshest put-downs one can toss a filmmaker’s way, but in the case of Our Hitler, it works perfectly- all 7 ½ hours.

16) Return to LH6- Ken Jacobs: Another Light Industry highlight, the Orchard Street preacher described a time when analytical projectors were a classroom fixture (and before they would become one of his primary creative tools), when the film studies discipline was still up for grabs, and how an influential pedagogy grew out of personal aesthetic concerns. 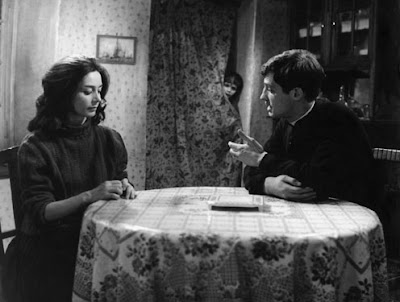 17) Leon Morin, Priest- Jean-Pierre Melville: An emotionally complex, sexy, and at times very funny tale of the lives of French women under Vichy rule, with Jean-Paul Belmondo playing a parish priest (yes, that's right) in an even finer performance than his justly famous turn in Breathless just months before.

*-Is it immodest to list these items that I have a direct association with? In both cases, it seems dishonest not to.
Posted by Jim Supanick at 4:44 PM