The seeds of Jacques Tati’s cinema are contained within his early cabaret mime routines performed throughout the 1930s in France, and later across Europe. Colette witnessed his act (perhaps at Tati’s peak, when he was billed with the likes of Edith Piaf and Maurice Chevalier), which so impressed her that in June 1936, she wrote in her journal:

Henceforth I believe that no festive, artistic, or acrobatic spectacle could equal the displays given by this astounding man who has invented something which includes dance, sport, satire, and pageantry. He has created at the same time the player and the ball and the racket; the balloon and the person inflating it; the boxer and his adversary; the bicycle and the cyclist. His hands empty, he has created the accessory and the partner. His power of suggestion is that of a great artist… In Jacques Tati, horse and rider, all Paris will see, living, the fabulous mythic creature, the Centaur.

Tati’s onstage multitasking was performed in the service of the mime’s peculiar brand of theatrical illusion. Jour de Fête, his first feature, affected a shift from busy-ness to business. Struggling with an efficiency scheme based on American industrial methods, a provincial postman (the prototype for his Hulot character) juggles letter-sorting and bike riding duties all at once; regardless of difficulty, the point is to never stop moving. 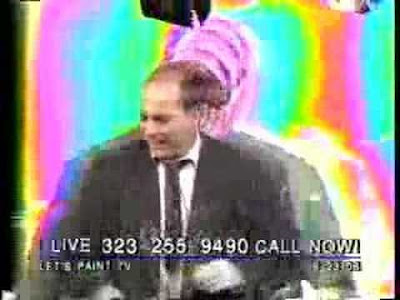 If Jour de Fête showed the imposition of Taylorism upon one man's workday, John Kilduff and Let’s Paint TV comically embody the way we live now. Forever on the move, Kilduff’s powers of suggestion are something altogether different (but more about that shortly.) Dressed in a three-piece suit, he appears each weekday on his live webcast (11:00 AM – 12 Noon PST at Stickam.com, or via Skype: letspainttv), keeping brisk pace on a treadmill while he takes calls from viewers.

Or irons a shirt.

Or carves a Jack-o-lantern.

All (more or less) at the same time.

Through it all, there’s something of the same irrational optimism described in Barbara Ehrenreich’s new book, Bright-Sided; unlike the "success stories" that appear there, however, none of Kilduff's activities are performed especially well. He is, as Nietzsche once said, “human, all too human.” Knowing this, he advises viewers to, “just half-ass it sometimes… half-assing it is sometimes your best bet here at Let’s Paint TV…”

The live video behind him is a fabulous mess, with greenscreening as crude as it comes. Cameras move spasmodically, switching spontaneously between shots in something resembling rhythm. A captivating, space-filling energy is generated, occasionally locking in with sounds of the treadmill whirring, Kilduff’s almost-out-of-breath voice, and the flashing title urging viewers to LIVE 323 255 9490 CALL NOW!

Endlessly upbeat and with an apparent sense of purpose, we might take him for yet another purveyor of self-actualization and alternative spirituality- if only his clothes were clean. Covered in paint that never made it to the painting (thanks to the forces of distraction), the suit is the giveaway: creativity and commerce, substance and appearance make for an uneasy coexistence. Chugging along at a steady 4.3 miles-per-hour, Kilduff distills every infomercial, business motivational speech, Landmark Forum recruitment effort, and fundraising telethon you’ve ever seen. The rhetoric and urgency are there, but thankfully, nothing’s for sale.

If his abilities are of a not-so-exceptional mortal, his affability in the face of idiotic callers—intent in hearing themselves swear on the air—is that of a saint (and not a little contagious.) His insistence on “staying positive” is different from that same message heard at an Amway regional sales meeting, where a hectoring, top-down manner is used to deliver veiled threats.

Kilduff’s personal website shows us his other creative endeavors; most surprising is that, unlike the paintings we see on the show, his other canvases, painted in an antic expressionist vein (and presumably on a break from the treadmill) are really quite accomplished. More consistent with his on-air persona are the many talents listed on his online acting resume, such as, “goofy dancing, oil painting, Host… Pogo Stick, Soccer, Softball, Swimming - ability – general… Disc Jockey, Improvisation, Licensed Driver, Mime.”

There’s an affinity between Kilduff’s show and the guerilla performances of Reverend Billy Talen; while taking a different tack from Talen’s incisive and overtly political oratory, both men use archetypically American models—the BlackBerry Man, the Southern Televangelist—as Trojan horses that deliver a brand of fun that somehow feels illegal. As in the Shopocalypse of Reverend Billy, Kilduff revels in anarchic spontaneity, casually summed up on an episode of Let’s Paint TV: