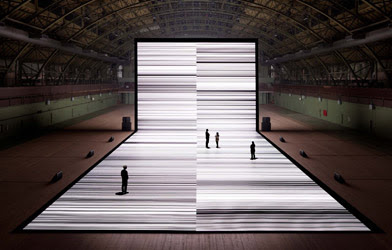 The current Film Comment includes an article I wrote about the transfinite, Ryoji Ikeda's stunning recent installation at the Park Avenue Armory. I've been intrigued by Ikeda's music since first hearing it nearly ten years ago. Good as it was, it left me wholly unprepared for CI, a "concert" he staged at Eyebeam in 2004 (concert is in quotes because Ikeda had abandoned all pretense toward live performance); that, along with last year's datamatics [ver.2.0] at Alliance Française, solidified his place for me as one of the truly important artists working today. the transfinite moves beyond that earlier work, integrating elements of expanded cinema, sculpture, motion graphics, concrete poetry and, of course, electronic music. A few critics, including Ken Johnson of the New York Times, didn't really get it; the hope is that this piece might offer a little belated insight: