Alvin Lucier’s "The Queen of the South" 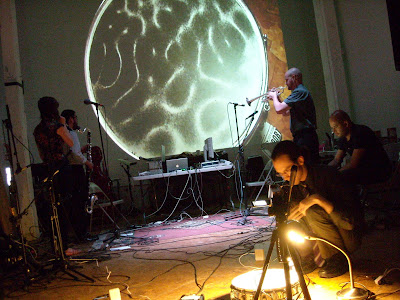 This is the first in a series of entries on individual works by the composer Alvin Lucier; it begins with The Queen of the South, commissioned in 1972 by Gerald Shapiro and the New Music Ensemble. Stay tuned over the coming months as the series continues.

The Queen of the South is for me part of an ongoing fascination with attempts by artists and musicians to visualize sound; typically achieved through technological means (regardless of the sophistication of materials at hand or degree of scientific understanding on the part of the artist), they are often informed by—yet distinct from—any science-driven objectives of recording and measurement. My recent article about Ryoji Ikeda looks at one recent example of this desire at its most elaborate; The Queen of the South represents a more back-to-basics approach.

Lucier’s composition draws direct inspiration from the work of the Ernst Chladni and Hans Jenny; Chladni, an 18th century German physicist, is best known for his pioneering research into the laws of acoustics and the visualization of sound waves, using simple materials like sand, flat resonant plates, and a violin bow. Two centuries later, Jenny (who passed away the same year Lucier’s piece was composed) extended Chladni’s explorations, conducting rigorous experiments with liquids, and using oscillators for precise calibration of audio signals. Later, he speculated about the potential healing powers of certain sound frequencies, thought that has been presented as fact by some of his kookier followers. 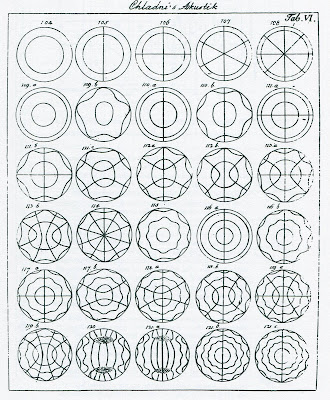 Lucier saw these experiments not simply as a form of drawing with sound; he was intrigued too by the momentary arrest and exposure of something invisible and ever in flux, a kind of photography before (and beyond) photography. Many of his pieces, such as Vespers and Bird and Person Dyning, foreground the process of discovery, enacted anew with each performance. They evoke a childlike wonder in the most positive sense, and he achieves this by stripping each piece down to its essential elements. For The Queen of the South, he steps back from Jenny’s precision instruments, deploying a musical ensemble with all its sonic idiosyncrasies and the human imperfections of its members. The prose score instructs performers to

“Sing, speak, or play electronic or acoustic musical instruments in such a way as to activate metal plates, drumheads, sheets of glass, or any wood, copper, steel, glass, cardboard, earthenware, or other responsive surfaces upon which are strewn quartz sand, silver salt, iron filings, lycopodium, granulated sugar, pearled barley or grains of other kinds, or other similar materials suitable for making visible the effects of sound.”

This indirect interface is a bit like watching someone use a computer mouse for the first time, struggling to understand the correlation between their actions and what happens upon the resonant surface. The various materials suggested in the score may respond quite differently to the same sounds- some offering visible resistance, others skittering across the chosen surface with minimal sonic prompting. Performers are given great leeway for real creative input, for Lucier is quite at home with the idea that no two performances of this piece will look or sound quite like another. In truth, Lucier—along with post-Cagean contemporaries such as George Brecht, La Monte Young, and others—went well beyond Cage in both the freedom granted to the performer and, following that, their encouragement of such varied outcomes (it’s too little known that Cage himself, for all his professed allegiance to chance methods, quite often displayed control freak tendencies.)

Important as Cage and his contemporaries were, Lucier was also reacting to the cultural and pedagogical traditions of the conservatory in which he was trained. Why must the search be the composer’s alone? What about the performers, or for that matter, the audience? By the time he composed The Queen of the South, he had established convictions about the importance of music as a process of inquiry, wholly antithetical to the values now calcified within the western classical tradition.

Back in early June at Issue Project Room, two ensembles- Loadbang (Alejandro Acierto, Jeffrey Gavett, Andy Kozar, and Will Lang) and Pygmy Jerboa (Maria Stankova and Ivan Naranjo) gave a fine performance of Lucier’s piece. Following a note suggested in the score for the benefit of the audience, a video camera transmitted a live signal of the image for projection onto a wall behind the performers. In an interview with Douglas Simon, Lucier explained that:

“...needing closed circuit video is a blessing in disguise. You make the imagery available to the audience, but what happens along with that is that you defy gravity, you turn the plates up on their axes, you change the spatial relationships, you show something that is physically impossible. And secondly, by translating the image to video, you’re turning a mechanical phenomenon into an electronic one.”

The groups at IPR were respectful of the score and to the sense of what Lucier’s music often sounds like. Their first iteration with salt on the head of a snare drum was perhaps the most successful, a particular combination of instrumental voices, resonant surface, and granular material that worked wonderfully together.

Eschewing traditional notation, Lucier’s prose scores are beautiful in and of themselves. Instructions are clear, and the language evocative- the score for The Queen of the South invites its performers to sonically conjure patterns and images from an inventory that includes “...beads, medallions, topologies of near or far environs, plaids, tweeds, road signs, floor plans, tapestries, diamonds,” and so on. It’s rare to encounter an artist so unafraid of the poetic associations within their own work. What’s more, the clarity with which he lays out his concepts extends to the performance aesthetic itself; Lucier’s music and his pedagogical contributions are very much of a piece.

The hand-wringing that takes place over the ever diminishing audience for contemporary art music rarely (if ever) considers that most listeners have no idea what composers are up to. Occasionally the composers themselves may bear some responsibility for this, but to me it’s the promotional materials—lazy, cut-and-paste press releases, program notes that comprise little beyond lists of career highlights—that are the great missed opportunities in bringing new listeners to music outside the mainstream. One look at Lucier’s Reflections: Interviews Scores Writings 1965-1994, published by MusikTexte (and from which the quotes here are taken) throws this into stark relief, lucid and with a generosity of ideas too often absent elsewhere in the world of contemporary music.

Through the transformation of language into sound and vibrating matter, then again into audio and video signals, the richness of this seemingly simple idea becomes apparent. As Lucier explained in that same interview,

“If you’re to play a piece in which the task is to put sounds into a material and experience the modes of vibration in that sound, as in The Queen of the South, ...you have two choices. One is to make any sound that you already know how to make, or any music that you know, and see what it does to the materials; in that case, you’re making son et lumière. That’s the first thing that everybody suggests I do, to plug in a Beethoven symphony, for example... Or to avoid that simple- minded situation, you can do something more simple-minded: ask a player to pay very close attention to what occurs in those situations and use those occurrences as a...—I was going to use the word “score”—use them as a procedure with which to continue making sounds.”

Is it possible to reconcile these two approaches, creating “sound that you already know how to make”, while at the same time paying “very close attention to what occurs”? Josh Solondz and I (aka SynthHumpers) will see if it’s possible sometime this fall- performances details forthcoming.