The only thing more surprising than the fact that Alexandr Rastorguev’s Clean Thursday was made at all is that it’s been shown freely outside of Russia. A look at the funding sources of this deeply unflattering portrayal of occupation forces in Chechnya suggests a government much more tolerant of criticism than the one we know now. But no, that can’t be it: for the usually secretive Vladimir Putin to allow this film international distribution only shows the depth of the former prime minister’s cynicism; if outside support ever existed for their mission of extinguishing the Chechen uprising it should effectively be destroyed for those who view the film. Accustomed as we’ve become to the restrictions exercised by our own military to shape and control its image following the embarrassments of Vietnam, the film’s candor is both remarkable and altogether unfamiliar.

All this may suggest that Clean Thursday (aka Pure Thursday and Maundy Thursday) rates as a Grand Statement in the history of war on film, though this is far from the truth. Its scope is as narrow as the set of disused railroad cars where much of it is set. Retrofitted with laundry and kitchen facilities, the old train now functions as a supply base situated close to the battlefront. The spatial confinement is not unlike that seen in submarine movies, save for the exterior scenes/cutaways relieving us from the claustrophobia of its interiors. The depiction of conflict (with exception to the opening sequence) is confined to name-calling and arguments over the quality of the food. 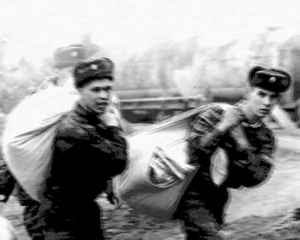 The film opens with a brief shot of the military outpost set against a mountain, cutting to an extended run of scratched black leader accompanied by the sounds of machine guns and heavy shelling. Allah Akbar!, one man cries, amidst frantic radio communiqués; later in the sequence, images of older women appear in semi-steady rhythm- the mothers of the troops perhaps?

The image alternates between black and white and color stock, yet even with the latter, a single hue is generally dominant. Steam rises, water drips; tanks and personnel vehicles leave their deep ruts on the surrounding land. The men try and make the best of it: moments of real tenderness playing with a puppy, in letters to home read aloud, and, to my surprise, a lengthy shower scene where they scrub one another’s backs and shave each others’ heads. At other moments it’s clear to what extent they’ve adopted the necessary mindset, desensitized to their enemy’s humanity; at their worst, it’s as though Leon Golub’s mercenaries have come to life. As one soldier puts it:

We thought that when we came here, the presence of our troops here... such power would demoralize everybody. Bullshit! They don’t give any fucking shit! Wild people can’t be demoralized... It’s impossible to deal with these animals without weapon. It’s cruel, but they are animals.

Other statements conflate warfare with sexual domination, most notably in a sickening and remorseless account of how a female Chechen sniper was repeatedly raped (and subsequently died) after capture. At other times, the conflation appears in the language itself:

We must rape if we came here, but not to play with tits.

Its language is without a doubt one of the most striking features of the film; I’ve refrained from schoolmarm-ish insertion of [sic] next to each linguistic invention above and to follow- the subtitles I quote are just as they appear in the film. Proper sentence structure is left far behind; the coarse masculine essence that David Mamet thought he owned has been captured here once and for all. Stupidity and wit are indistinguishable, with neologisms—dacksuckers, bustards—worthy of Joyce, or Norm Crosby, or Stanley Unwin. 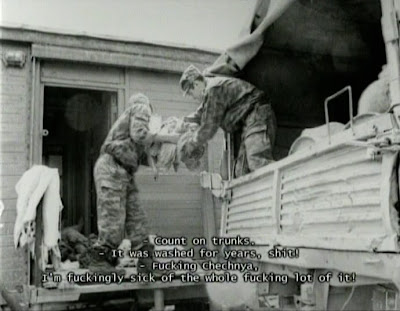 On the walk over to the discussion following the screening, there was much talk of how “bad translation” diminished appreciation of the film for some. I had a hard time accepting that it was really as simple as that, since the raw expressive power of the language seemed too perfect to be accidental (and was it really possible to separate objections about the what that was said from the how?) Those conversations continued into the discussion proper; unfortunately, Rastorguev was unable to attend the Seminar, but he did forward an apology through programmer Irina Leimbacher that confirmed his disappointment with the quality of the subtitles’ translation. The artist’s intentions are nice and all, but I still felt the crudeness of language to be a vital part of the film’s power, conveying the same sort of brutality used to carry out their mission. Both sides had abandoned civilized discourse—in all its possible aspects—long ago and, as co-participant David Dinnell very astutely suggested, “...perhaps syntax is the first casualty of war.”
Posted by Jim Supanick at 3:09 PM