Filing out from an off-campus screening at the Hamilton Theater Tuesday night, we were caught amongst a mass of teenagers there for a special midnight show of Transformers: Revenge of the Fallen; it was all a bit like a staged reenactment of one of the final shots in the film we’d just seen, Lucien Castaing-Taylor and Ilisa Barbash’s magnificent Sweetgrass. The scene in question shows a vast mob of sheep driven on the hoof from summer pasture and now bunched up at a railroad crossing close to market. Amidst the cacophony of bleating and bells clanging, the men whoop it up to celebrate the end of their journey. Not known at the time of shooting, it’s later revealed that this 150-mile long trek across streams and over arduous terrain to public grazing lands in the Absaroka-Beartooth Mountains (and back out again) would be their last. 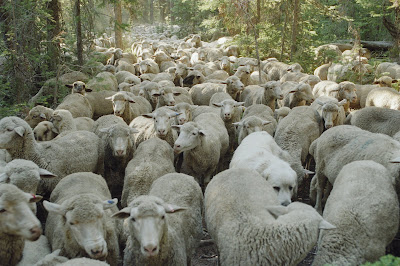 My initial trepidation—based on the first several shots—had been that this would be yet another quasi-structuralist “slow western”; thank goodness my initial assumptions were wrong, for this was a film that called for nimble improvisation and dynamic response to a subject not known for its ready compliance to documentary filmmakers (or to anyone, for that matter.)

Castaing-Taylor and Barbash returned to Montana three times to track (or, as they prefer to call it, record) the sheepherders’ journey through landscape that tests the limits of endurance, not just of humans, but of their horses and herding dogs as well. Aristotle had it wrong when he called shepherds “the laziest” of workers; their responsibilities are in fact never-ending. Even bedding down for the evening offers no real respite, as grizzlies pay frequent nocturnal visits to the herd.

Despite all that’s been made of the lightness and portability of modern equipment, anyone who knows of filmmaking’s difficulties under the best of circumstances will intuit the technical obstacles faced with shooting in such a remote locale. During the Q&A afterwards, Castaing-Taylor spoke of carrying their gear on horseback and accessing electricity from a car battery brought along for that purpose, a degree of hardship reminiscent of that faced by Eadweard Muybridge and other 19th century land survey photographers (and so vividly recounted in Rebecca Solnit’s River of Shadows), carrying not just the heavy glass plates, but also the wet-plate chemistry and darkroom itself in which those exposed plates would be processed.

An irony of the film is that only through sensing this invisible effort behind the camera will many of its viewers ever truly relate to the very different effort expended in front of it, activities so utterly foreign as to qualify as ethnography. Hannah Arendt’s distinction between work and labor is useful here; the latter, she wrote, “never designates the finished product, the result of laboring, but remains a verbal noun to be classed with the gerund.” Put another way, labor is by definition a never-ending process, never offering the satisfying permanence that is a thing; work, on the other hand, produces “a work” to be claimed as one’s own. 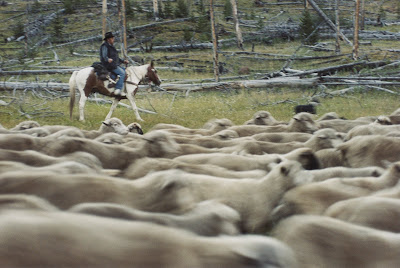 As subjects, the sheep posed unique technical challenges, ever-moving across windswept vistas (and displaying an occasional flare for comedy, as when they break that cardinal cinematic rule by staring straight at the camera). Ernst Karel’s sound design is extraordinary, and crucial to the film’s success is his deployment of wireless radio mics to bridge great distances and allow a paradoxical sonic intimacy across these vast open landscapes. The extreme disjuncture of audio/visual perspectives is powerful, as much for a practical response to the exigencies of livestock and landscape as for more expressive purposes, like conveying the loneliness of the sheepherder’s day-to-day routine.

At times we hear close range conversations amongst the men; in other instances, there are musings and muttered curses, having forgotten (or no longer caring) that they’re not really alone. “...Fuckin’ mountain climbin’ goat climbin’ cocksuckin’ MOTHERFUCKERS!!!” These and other epithets are directed at the herd, and later there’s a cellphone call—heard but mostly unseen—from one of the men to his mom from the top of a mountain. Funny, yet at the same time heartbreaking to hear such a tough character at wit’s end while we gaze down this beautiful mountainside; the sheep in the distance resemble maggots, scattering ever further. The dog, ordinarily darting to and fro, barking and nipping to contain them, is unable to stand, his paws worn raw from the journey. How easily it can all fall apart, as the full scope of their responsibility is laid plain before us.

The current glut of the passive observational within exploratory nonfiction filmmaking might be ascribed in part to James Benning’s influence; while I admire his work (and most especially the restless inquiries into narrative form apparent in his earlier and lesser-known films), I find that the locked-down stasis, extended shot duration, and mistaken equivalence of disengaged eye and heightened perception adopted by many of his less imaginative devotees—all in the name of rigor—too often sell their subjects short. By now, the duration of a shot as determined by the manufacturer of the roll on which it’s filmed is really a gesture more academic than radical; at what point, really, does “rigor” become “rigor mortis”? Happily, Sweetgrass avoids this.

Rigor mortis is in fact the necessary precondition for Pawel Wojtasik’s Nascentes Morimur (Autopsy), a video that delivers just what’s promised by its title. Like the second autopsy ordered up by Michael Jackson’s family (and before the findings of Jackson’s first had even been written), I initially asked myself, was this really necessary? After all, there was Stan Brakhage’s The Act of Seeing with One’s Own Eyes as its obvious precedent. And yet, once again... the hesitation I felt in watching its opening shots quickly fell by the wayside. Opinion was perhaps the most divided here amongst any work screened at this year’s Flaherty, as some saw Wojtasik’s video as a too-formal treatment of such highly charged material; on the contrary, I found the dialogue Wojtasik created between his work and Brakhage’s earlier film to be altogether illuminating.

Those who’ve braved that difficult encounter with The Act of Seeing... may know of the struggle Brakhage had in making it; he once told an audience that, “Having turned into my forties I had never seen a dead person, except once as a child... I was feeling the breath of age down my neck and had a sudden strong compulsion to at least look at the human innards, to look at death in the sense of what happened to others.” Despite this determination, he begins tentatively, with many shots in the first several minutes framed in ways that mask or otherwise obscure the autopsy itself. As the film progresses, we see him gradually overcoming his fear, moving boldly toward scalpel and saw. Several autopsies are performed, and Brakhage makes it a point to present this as an ongoing process. In truth, the film is in many ways more about the living- the work the autopsists do, and Brakhage’s attempt, for his part, to be equal to the task. Much more, in other words, like a day in the life of the morgue (with an appropriately grungy look, shot under lower light on grainy stock) than how an autopsy is performed. 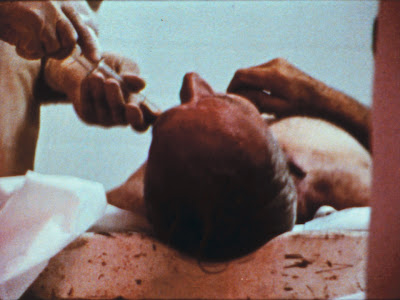 still from The Act of Seeing With One's Own Eyes by Stan Brakhage
Courtesy of the Estate of Stan Brakhage and Fred Camper (www.fredcamper.com)

Wojtasik felt it important to remain with a single body throughout (despite having shot four different autopsies, he just used footage from the first), and concludes with its torso stitched back up again. In the opening shots of Nascentes Morimur (which were shot to invoke The Act of Seeing...), there’s none of the nervous energy seen in Brakhage’s camera work and editing. Wojtasik’s bodily presence is that of careful control, though much of this is achieved through post-production. The light is clear, colors are vivid and marked by deep shadows. Movement is slowed as we settle into steady, deliberate rhythms; the image shifts in and out of focus, and each gradual fade to black is like an exhalation. All this is bracketed within a slowly contracting and expanding frame, opening wide to reveal glistening viscera, and narrowing again to an abstract sliver of color. In a certain sense, it’s an autopsy of an autopsy. 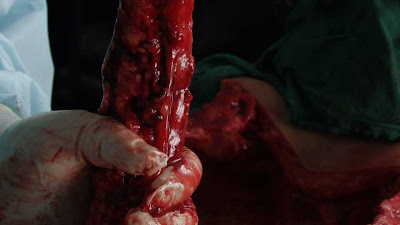 Nascentes Morimur is quite clearly an act of defamiliarization, not only of what we know about our own bodies, but also of whatever we may have learned of the autopsy procedure by way of The Discovery Channel or some other source. A remarkable shot near the end of the video shows both chest cavity and head not only opened and emptied, but flesh and muscle turned partially inside out to resemble some rare and monstrous orchid; I’m reminded of the bold theatrical gestures Pietro da Cortona’s anatomical engravings, where a cadaver holds the muscles of his rib cage as though displaying the fine silk lining of a custom-tailored dinner jacket for all to view. 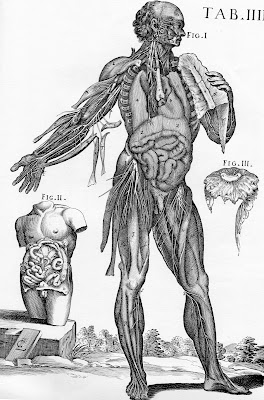 Perhaps the most difficult viewing in the entire autopsy procedure (and seen in both works) are the steps taken to access the pineal gland; like a flight recorder for the human body, this tiny spot at the center of the brain is said to contain more information about the circumstances of death than any other part. To get there, the forehead is incised, and the face pulled back like a stubborn rubber mask; from there the skull is slowly cut with a rotary power saw and the brain removed. Never have I been more thankful for silence than here.

In The Act of Seeing…, Brakhage abandoned all aspirations of reanimating a no-longer-living being cinematically, as with his Mothlight or Sirius Remembered; instead he used film as an instrument to redirect that “breath of age” felt down his neck so he could “whistle or at least sing when moving through the graveyard.” In 2001, he expressed disappointment—despite having shown at the Seminar on three occasions beginning in 1967—that the film, “…isn't something that would satisfy the Flaherty people. Again they have rejected The Act of Seeing With One's Own Eyes. Why?” What he meant by “rejected” is not quite clear, but his statement plainly suggests a desire to be taken seriously (though on his own terms) as a documentarian.

Interestingly, Wojtasik approaches a way of seeing that Brakhage himself advocated in earlier films, and most famously in his Metaphors on Vision that, “does not respond to the name of everything but which must know each object encountered in life through an adventure of perception”, and away from that, “...which mirrors the movement of the individual toward death by its increasing inability to see.”